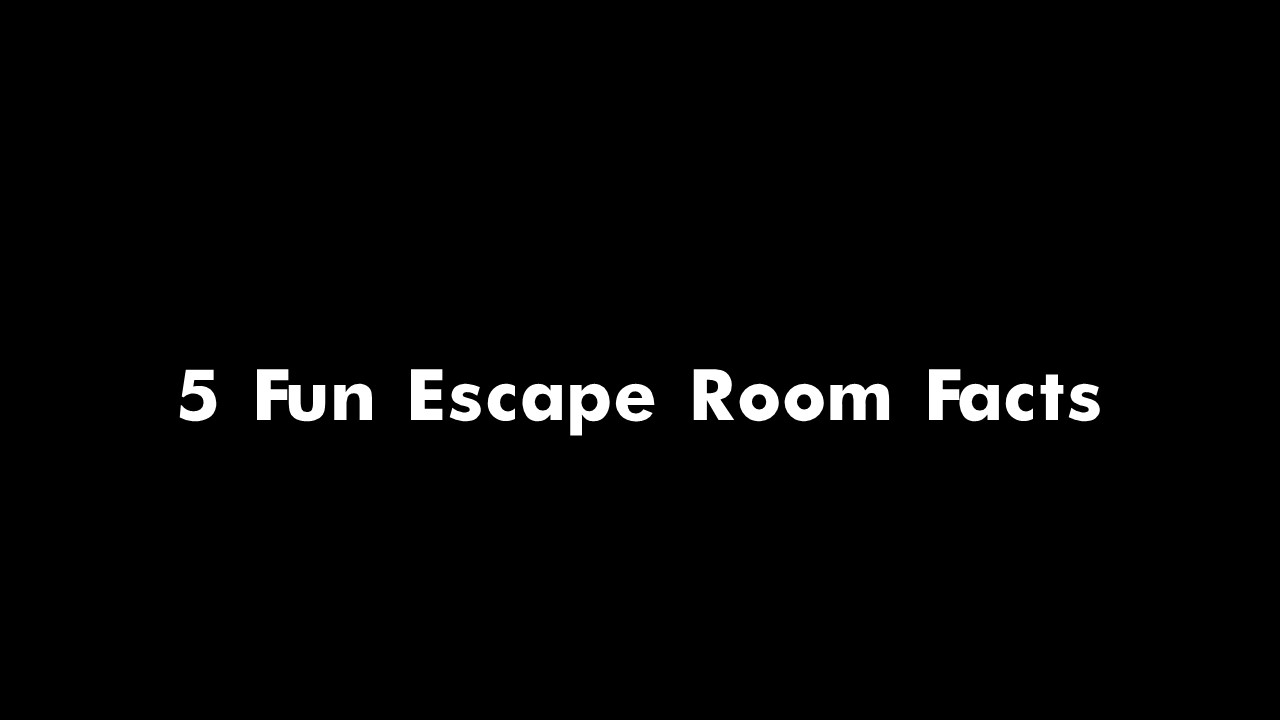 The escape room industry is huge and they have become so popular, but there are still lots of people who don’t really know much about them. So we have put together our top 5 fun facts about escape rooms to help educate you all on the escape rooms we love so much!

It may surprise you to learn this but the concept of escape rooms actually comes from a video game! The game was called Crimson Rush and it was created in 2004 by Toshimitsu Takagi. In the video game you are trapped in a crimson coloured room and have to solve a series of clues, 23 in total, to escape! Inspired by this game, the first ever escape room opened in 2007 in Japan. It was created by Takao Kato and built by the company SCRAP.

There are 50,000 Escape Rooms Worldwide

Since these beginnings in 2007, the escape room industry has really taken off and it's constantly expanding. It is now a huge industry! In 2016 it was estimated there were 3,000 escape rooms across the world, this has grown rapidly in just a few years and in November 2019, it was estimated that there are over 50,000 escape rooms worldwide! With at least one in 44 different countries. In the UK it’s estimated we have nearly 1,500! Other countries have even more than this, such as the USA is estimated to have 2350. In The Netherlands, there are so many escape rooms that they have one game for every 20,000 people in the country! Here at AIM Escape Rooms in London it comes as no surprise to us there are so many, we can totally see why it’s such a big craze.

The Most Popular Themes are Prison, Zombie and Bank Robbery Escapes

With that number of escape rooms there are hundreds of different themes of rooms to choose from. Although within these three seem to stand out as the most popular with players: outsmarting guards and escaping from prison, escaping from zombies or finding a cure for them, and robbing a bank and fleeing before you’re caught! It seems that these are the most popular as it is a reflection of popular TV shows and movies. And let's be honest… we’d all love a shot at escaping from a prison or robbing a bank without all the consequences!

Even one of our rooms here at AIM Escape Rooms in London is in line with one of these 3 most popular themes! Our Patient Zero 2150 room is about scientists that have created a pathogen which turns humans into zombies… Your task is to contain this bio-threat and escape the lab unifected!

The Longest Escape Game is 3 Hours Long and the Shortest Just 5 Minutes!

Generally escape rooms tend to last around an hour, this includes our London escape rooms - we give you a thrilling 60 minute countdown to escape. But there are varying time limits depending on the room you are playing. And they do vary by a wide range… The longest escape room in the world is the 'Paradox Project’ in Greece and it can take up to 3 hours to complete! On the other hand, the shortest one is only 5 minutes long! It’s ‘The Chamber’ and is part of a Halloween haunted house pop-up called Evidence of Evil in Connecticut, USA.

Escape Rooms are Specifically Designed with One Thing in Mind

As much as escape rooms are a great game to play and provide a lot of fun, they have a bigger purpose which is beneficial to players. They are specifically designed to build and test your team work capabilities! There is too much in one escape room for one player to solve alone and some puzzles physically require more people. Therefore escape games require good team working and communication skills in order to beat them. It’s this reason why escape rooms are so popular for team building events, companies bring their employees to play and they leave with a new level of cooperation as a team that they will hopefully take back to the office with them.

Now that you have 5 fun facts there are to know about escape rooms, book in to play AIM Escape rooms in London and impress your friends with all your new knowledge!