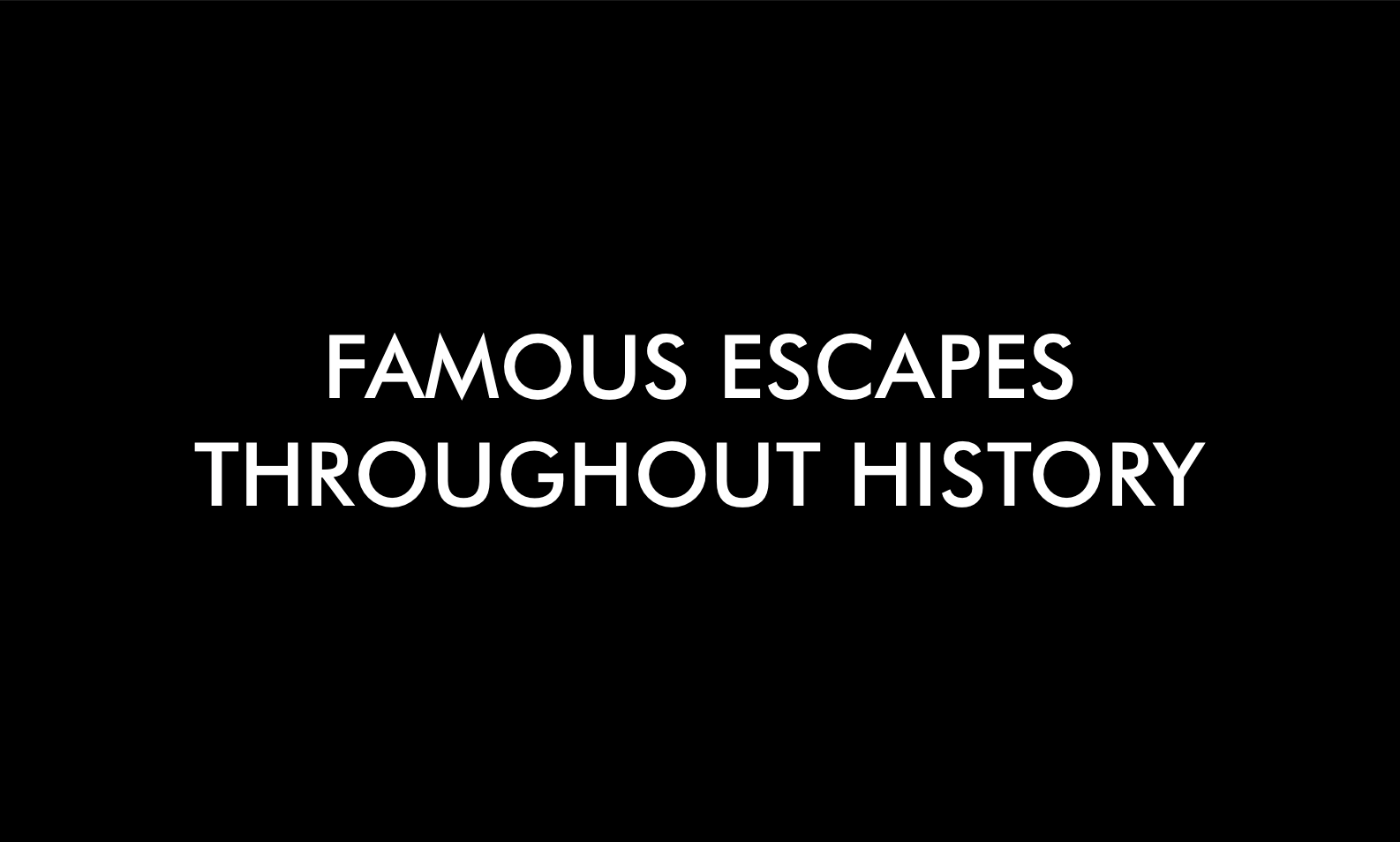 Everyone loves a good escape story and here at AIM Escape Rooms in London, we are no different! There have been many daring tales over the years, ranging from the Houdini to The Great Escape. In this article, we’ll be taking a look at some of our favourite from history.

Alcatraz is arguably the most famous prison in the world and also one of the most difficult places to escape from. Located on an island off San Francisco, the escape from Alcatraz is made all the more impossible due to the freezing cold waters that surround the island. The distance to shore is 1.25 miles, but the actual distance that you would need to swim would be much further than this due to the very strong currents.

Although no-one has officially escaped from Alcatraz, three bank robbers - Clarence Anglin, John Anglin and Frank Morris are widely believed to have been successful. The three men put together an extremely complex escape plan which involved fake heads, digging tunnels with spoons and a raft made with raincoats. Their bodies were never found, so it is widely believed that they successfully made it to shore despite prison officials claiming this was not the case.

One of the greatest escapes on English soil took place a short walk away from our escape rooms in London. John Gerard, a Jesuit priest, was imprisoned in the Tower of London in 1590. Seven years later, accomplices rowed across the river and managed to get a rope up to him. Gerard used this rope to abseil down from the tower and escape to safety in the boat. His escape was made all the more unlikely due to the torture and malnutrition that he had suffered in prison over the last seven years.

Another famous escape which took place in England was that of Alfred Hinds. Not only did Hinds escape once, not even twice, he managed to escape three times! Despite his claims of innocence, Hinds was Imprisoned for robbery in 1953. Hinds escaped through locked doors and over a 20ft high prison wall, earning himself the nickname ‘Houdini’ Hinds.

After being re-captured 248 days later, Hinds again managed to escape once more, whilst in court disputing his unlawful arrest. Hinds was taken to the bathroom by two police officers, but once they removed his handcuffs, he bundled them into a toilet and locked them in there. This was a very short lived escape, lasting just five hours before he was recaptured.

Hinds escaped a third and final time less than a year later, escaping from prison in Chelmsford. This time Hinds managed to evade the police for two full years!

What is more incredible about Hinds’ story is that he maintained his innocence throughout the entirety of this time. Hinds wrote letters to British MPs explaining his innocence and offered interviews to the press during his time on the run.

Hinds eventually went on to join MENSA following his release from prison.

They say that yoga increases your flexibility and that was especially true for Choi Gap-bok who escaped from a Korean prison in 2012. Choi, who had practiced yoga for 23 years was arrested on suspicion of robbery in September 2012, but he was trapped inside his cell for just five days.

On the morning of September 17, Choi applied skin ointment to his upper body and proceeded to slip through the tiny food slot in his cell door. The slot was just 5.9 inches high and 17.7 inches wide. Choi managed to complete his escape whilst three guards were sleeping nearby.

Without doubt, the most famous escape artist of all time is Harry Houdini. Houdini performed a whole range of elaborate escapes, challenging police officers around the world to try and restrain him. One of his most famous stunts was being buried alive and then escaping. Houdini almost died when first attempting this in Santa Ana, California in 1915, but this didn’t stop him taking it a step further by being submerged in a casket that was dropped into a swimming pool in 1926.

If these famous escapes have inspired you to do one of your own, then now is the time to book one of our escape rooms in London. With four different games available to play, we’ve got you covered. Whether you’re looking for an escape room for two, or a family escape room, we’ve got something for everyone!

Head over to our booking page now to take on your next challenge!