What Not To Do In An Escape Room 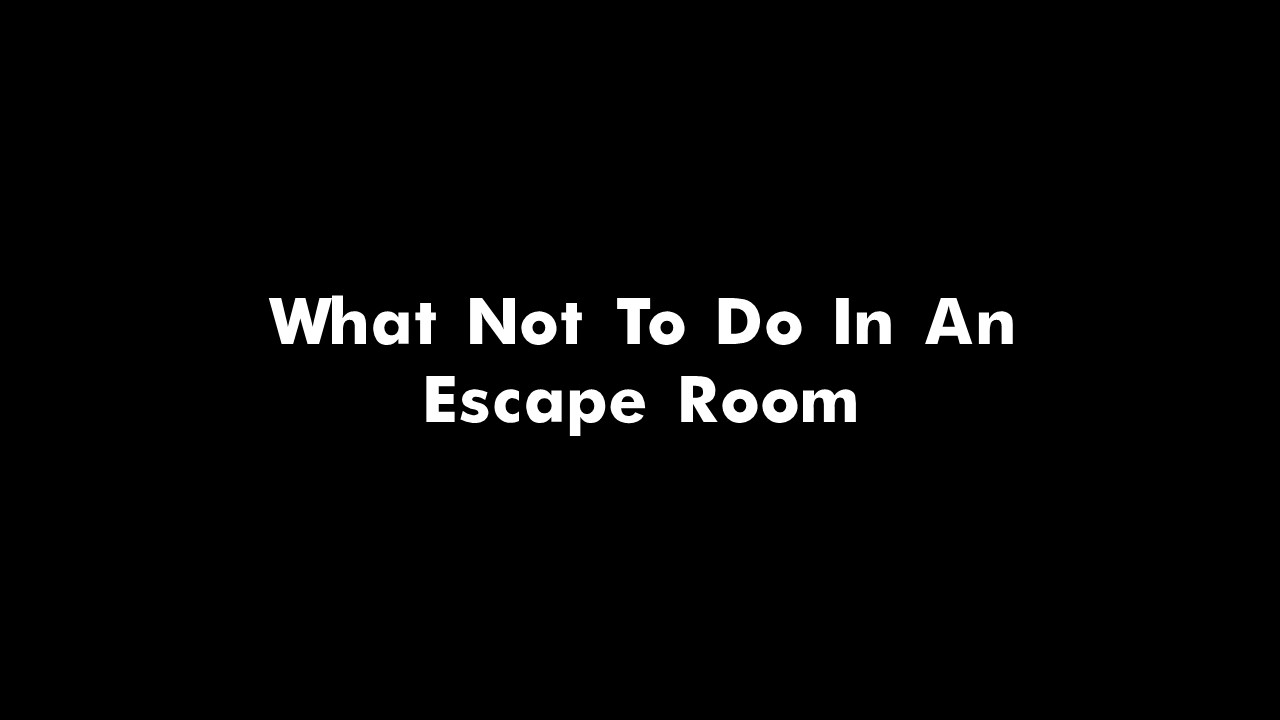 What Not To Do In An Escape Room

Everyone wants to be able to make it out of an escape room in time, maybe even beating a personal or room record, but teams often make common mistakes when playing which can prevent this from happening. We’ve already advised you on our top escape room tips, now find out what NOT to do when facing an escape room.

Not pay attention to the information you’re given

Whether it be a talk by the games master, or video clips in the room, an escape room experience will often include a way of giving you some background on the story and what your task is as players. This isn’t included just for the fun of it, they often provide you with some extra information. They may include underlying clues and hints, or instructions on what to try and solve first. Therefore if you fail to pay attention to them, you might miss out on vital information that can help you to escape!

Additionally, it's likely the games master will give you an important safety briefing before playing. Listening to this will help you all to stay safe, as well as helping you understand what can be used and what to ignore in the room. This will ensure that you’re maximising your time in the game.

At AIM Escape Room London we have high levels of technology in all of our rooms, meaning we include features such as videos throughout our games. These tell the story and allow players to be completely immersed in the experience, and importantly help you move on in the game and clue you on where to head next!

Communication is key for any team facing an escape room and with this it’s important not to keep vital clues or information to yourself. Any patterns, clues or props should be shared with the rest of the team as it can help you all work together to solve the puzzles as fast as possible. Keeping it to yourself can slow you all down as you might not be able to figure out the specific thing alone. Communicating clues and everything else to your team can allow them to provide a fresh perspective and new ideas you might not have thought of yourself.

Additionally, it's important to remember these rooms are built around teamwork, so it's no use trying to be the hero and want to solve everything alone. Don’t be the person standing in front of a mechanism or puzzle insisting you can solve it and not giving others a look in. Two heads work better than one so take advantage of this, get the puzzle solved quicker and move onto the next one - as a team!

In an escape room tensions run high and the pressure is on as you try to escape in time. There are many different things that can cause people to lose their temper easily, whether it be that you're stuck on a frustrating puzzle, or dealing with a bossy player or one who is insistent they are right. In family escape rooms it can happen that parents ignore and disregard what the children say to them which can cause an argument to occur. It's important though for you to keep calm or you’ll risk messing up the whole game! All arguments do is distract you from the goal and therefore reduce your chances of escaping.

Everyone will already be on edge as they feel the clock ticking down, giving all the more reason to keep your cool as you interact with your team - chances are if just one of you stays calm then this can reflect on the rest of the group. If someone is stressing and taking it out on the rest of you, just take a breath and focus on that goal , remember it’s a game and you are there to have fun!

Bring too many or too few players

Having the right size team can be essential to your escape room success. There is such a thing as having both too many or too few players! If you bring over the maximum number of people allowed in a room then you may find you have players twiddling their thumbs with nothing to do. On the other hand, if you play with the minimum number of people then you may be overwhelmed by the number of puzzles there are to solve.

Ultimately the decision on the right size team is down to you, you're the only ones that can judge how many of you you’ll need in one team in order to escape. Experienced and advanced players may want to be in a small team and play an escape room for two or three, however first time players or those with young players might want to bring as many people as they can!

Here at AIM Escape Room London, you can play with a maximum of 5 or 6 in a room, depending on which room it is. This can allow you to perhaps play a family escape room and bring everyone along to play. On the other side, the minimum we allow in a room is two players, which is something not all escape rooms allow, making us the perfect escape room for two.

Try to solve puzzles without all the information

Of course there will be puzzles and mechanisms in an escape room that could (although its very unlikely!) be guessed, such as a lock as there are only a certain number of combinations, but you do not have enough time to go through every possible one in hopes your guess might be right. It’s the puzzles and mechanisms similar to this in the room that will require you to have certain information before you will be able to work them out. They will often require you to solve something else first or find props and clues around the room before they can be solved.

Escape rooms run in a sequence, they run in a logical order with steps that need to be played through until you eventually escape. So if you see something and it really doesn’t make any sense and doesn’t seem to be connected to anything you’ve found so far then you could be missing a vital step with vital information. Just because a compelling puzzle catches your eye, doesn’t mean this is high priority. Don’t waste your time, think of it logically and try to find what should be done first.

Looking for your next escape room in London to put your new found knowledge into practice, then come down to AIM Escape and see if you will escape in time...